Podcast: Overcoming Barriers to Getting People Outdoors for Their Health

Christopher Springmann interviews the executive director of Willamette Partnership, Bobby Cochran, about the Oregon Health and Outdoors Initiative, a movement to get people outdoors more often for their health, and specifically, about two of the Initiatives latest projects: LatinXplorers in Mt. Hood and the Jade District Greening Project.

Bobby Cochran: You’re seeing more and more stories about the links between health and nature.  But it has yet to inform core infrastructure decisions on how we create healthy places for people to live.  So, the Robert Wood Johnson Foundation did a study that basically said, “Your zip code is going to determine way more of your health outcome than your genetic code.”

Christopher Springmann: That’s Bobby Cochran, executive director of Willamette Partnership, a conservation nonprofit based out of Portland, Oregon. The Robert Wood Johnson Foundation he mentioned, which is the nation’s largest philanthropy focused solely on health, honored Bobby with the Culture of Health Leaders award for Willamette Partnership’s work linking public health and environmental protection, an effort known as the Oregon Health and Outdoors Initiative. The goal of the Initiative is to get more folks outside, more often for their health, especially those facing the greatest health disparities. In this interview segment, we learn more about two of the initiative’s projects that are taking off.

BC: So inOregon, if you’re African-American, Latino, Native American, you have a disability, or you live anywhere in rural Oregon, you’re likely to have significantly more or higher incidences of chronic disease, like heart disease and asthma. And so, those are the populations we’re really working most closely with. And so, some of the work under the Health and Outdoor Initiative is really ramping up. Two of the most exciting pieces are two pilot programs. One of them is in Hood River with our partners at Next Door Inc., which is a social service organization that launched a program called Latin Explorers. And almost every weekend, there are hikes going out, snowshoeing activities going out, where you have groups of peoples and families—moms, kids—out hiking in the area around Hood River. And we’re working with the Providence Center for Outcomes Research and Education to actually measure changes in physical activity, depression, and stress.

CS: Have folks ever said to you that, in chatting with their relatives or parents that, you know, “You know, folks like us don’t go camping. I mean, you know, we don’t go hiking. It’s just not part of our culture.” For whatever reason, there are these existing myths and stereotypes about what people do or do not do within their ethnicity or culture. Do you hear comments like that?

BC: Oh, all the time.  We, we hear comments like, “Oh, my family doesn’t do that.”  Or, “I’ve never.” Or, “I, I don’t even know where to start.” And it comes from two different places: One is never having the experience. And I think the second is actually going out into nature—outdoor environment and experiencing some form of prejudice.

CS: Are there fears of being out there all alone and, and not around, sort of, the mainstream culture and neighborhood? 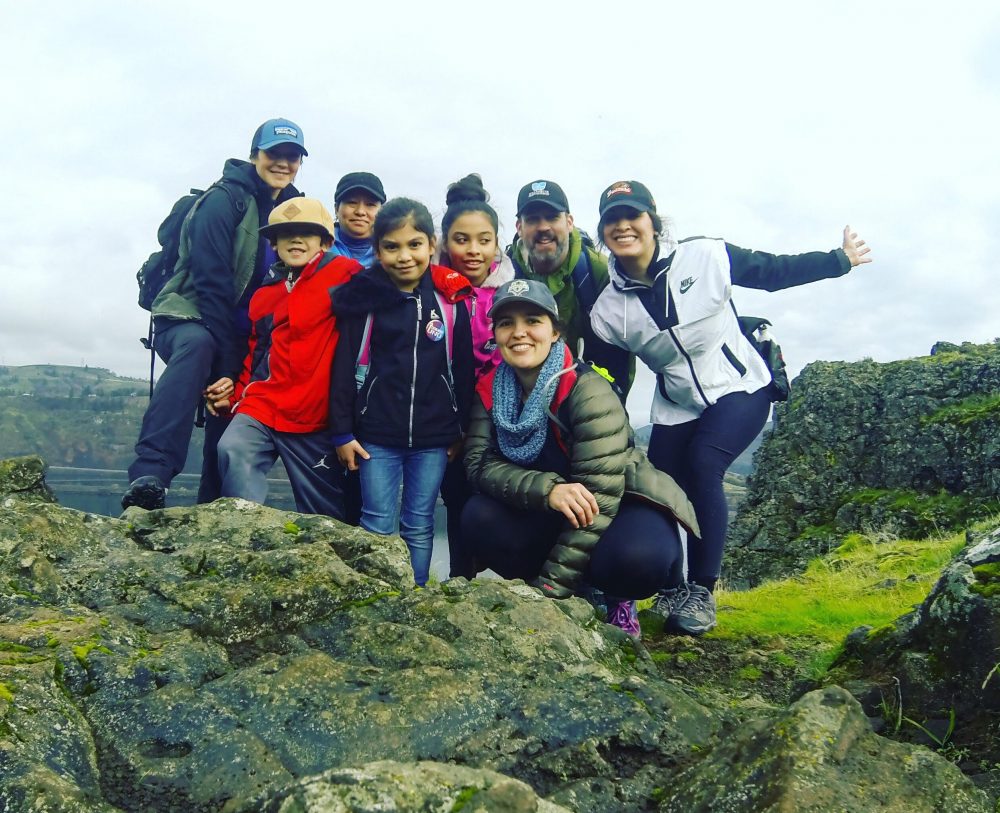 Willamette Partnership’s executive director, Bobby Cochran, and a group from Next Door Inc. go for a hike in the Columbia Gorge. The Next Door Inc.’s LatinXplorers program, training community health workers to lead locals on hikes, is a project of the Oregon Health and Outdoors Initiative. Photo: Yesenia Castro

BC: It’s not mainstream culture and neighborhood.  I think, in talking with, with a lot of our partners, if you have never had a positive outdoor experience, it’s really important that those first experiences are with people you know and trust.  And so, going out as a group—as a community—is the most important thing. And that’s part of why the Health and Outdoor Initiative is really centered on community health workers as the leaders. And so, in Next Door Inc., it’s not Sierra Club that’s leading the hikes; it’s community health workers from Next Door Inc. that are leading the hikes. And, actually, we arranged that Sierra Club and Latino Outdoors provide the training for those community health workers, so they had the skills and the understanding and the insurance coverage and everything they needed to be leaders. And I think that experience is breaking down barriers. And hearing Latino Outdoors talk about, kind of, the evolution is the first few experiences are as a group and then some people decide they’re going to go be mountaineers; some people decide they’re going to hike; some people decide they’re going to go ski. So, those experiences just get different. And once you’ve opened the doors and made it comfortable, you’ve got it.  But I think there’s also other important things that the Hood River group has talked to us a lot about is, signage is not bilingual.  It’s not really clear what you need permits for.  Forest Service uniforms look similar to Immigration and Customs Enforcement uniforms. So, and then other pieces that we’ve heard is there’s not enough group camping facilities or group picnic facilities. And there’s rules about moving picnic tables together. (music bed starts) And I think Oregon State Parks is working through some of those issues so that outdoors is really welcoming to everybody.

CS: There are health and outdoors opportunities Willamette Partnership is supporting right now for the Health and Outdoor Initiative, opportunities that are literally just around the corner in our neighborhoods. I asked Bobby to describe one, the Jade District Project, and tell us why is it so important to this community.

BC: I think the Jade District Greening Project is really being led by the Asian Pacific Action Network of Oregon and Opal Environmental Justice. Willamette Partnership is just in a supporting role for that. Those two groups and a number of other partners have been having conversations, particularly about how do you increase green space and tree canopy on two census blocks over on the east side of Portland. And if you think of where I-205, 82nd Avenue, and Powell and Division, that’s kind of where we’re talking about. That area has some of the highest incidences of asthma in Multnomah County. It’s bracketed by these kind of high-volume transportation corridors. It’s got some of the lowest, kind of, areas of tree canopy. It’s linguistically diverse, low-income. And I think what the Jade District Project has identified is, they want to increase tree canopy, increase access to green space, increase transportation safety, combat gentrification, a number of different issues. And so, there’s a strategy being put into place to increase green space, particularly for two things: to reduce exposure to air pollutants and to increase birth weights. If we can reduce air pollution exposure and increase birth weights, that creates a foundation of health that can help the community and the neighborhoods move forward. So, Willamette Partnership’s role is really thinking through how you build the measurement systems and the business case so that it doesn’t become a future use here and there. That we’re really able to say, “No. Let’s get towards the 80 percent canopy closure in the Jade District. And let’s invest millions of dollars—not just a few hundred thousand here and there.”

CS: Thanks for joining us. And in the next installment about Willamette Partnership’s work on the Oregon Health and Outdoors Initiative, Bobby gives us the business case for why Medicaid should be investing in trees at hospitals. Yes! Why health systems should be thinking about having a view of nature from every hospital room—because that has been proven to decrease recovery time. I’m Christopher Springmann, and thanks for joining us.