This September 30, Oregon ranchers, farmers, environmental groups, and state and federal politicians will get together for the first time in more than a year to celebrate their past collaborative accomplishments toward protecting the greater sage-grouse—an iconic bird species of the American West’s sagebrush steppe—from extinction and keeping it off the federal Endangered Species List. They call this ambitious on-going partnership the Oregon Sage Grouse Conservation Partnership, or SageCon.

One of SageCon’s key accomplishments has been developing the state’s Sage-Grouse Action Plan, which lays out a path for recovering the species and the sagebrush steppe habitats that both the bird and Oregon’s ranching communities depend on. The real work, however, has just begun. The plan has been developed, but the real test of the collaboration will be how many of the long list of SageCon partners are ready to walk that path together.

On Sept. 22, 2015, the U.S. Fish and Wildlife Service, or the Service, determined that the greater sage-grouse no longer warranted listing under the federal Endangered Species Act. The decision marked the culmination of years of difficult work between ranching communities, environmental groups, state governments, and their federal partners in many of the 11 Western states in the sage-grouse’s range.

People in Oregon worked hard to demonstrate to the Service that local- and state-level controls could work, not only to prevent the species’ extinction, but to also fully recover its habitat in a way that supported economic development and the well-being of the communities across central and eastern Oregon. 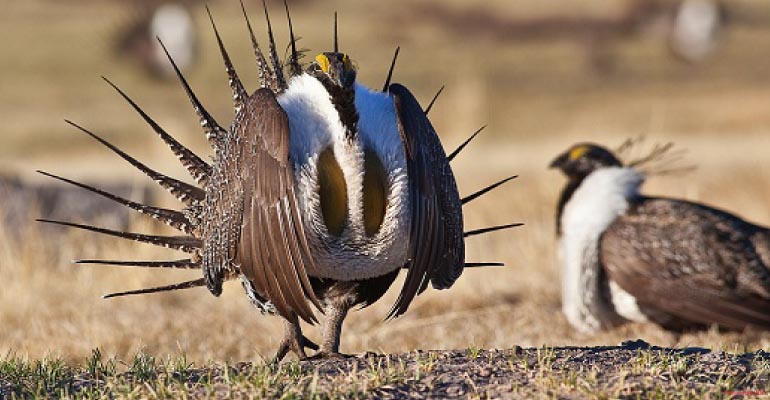 Ranchers, environmental groups, and state and federal agencies are all working together to protect this iconic Western bird, the greater sage-grouse, and its sagebrush steppe habitat. The partnership, known as SageCon, will meet this Friday, Sept. 30, to discuss putting the state’s Action Plan into action. Photo: Bureau of Land Management

The results were impressive. Ranchers and the Oregon Cattlemen’s Association worked with local governments and the Service to develop voluntary landowner agreements. These agreements allowed ranchers to commit to conservation actions that would both benefit overall range health and the sage-grouse, and to gain recognition from the Service that those actions would meet Endangered Species Act requirements if the bird is listed in the future.

The state and its federal partners, working through the Oregon SageCon, committed significant new funding to battling wildfire and invasive species, which are the primary threats to sage-grouse in Oregon. State agencies and local governments worked together to develop rules that steered new development away from the most valuable sage-grouse habitat. And, Willamette Partnership worked with Oregon SageCon to create a flexible approach for mitigating impacts that occur in sage-grouse habitat. In all, Oregon’s efforts appear to have contributed significantly to the Service’s decision not to list the species.

However, implementing the state’s Action Plan will take an even greater commitment to collaborate from the diverse group of partners. As writer Peter Drucker once said, “Plans are only good intentions unless they immediately degenerate into hard work.”

The Oregon government has an opportunity to lead. That means hosting a table where the full diversity of stakeholders can come together to resolve problems, address disagreements, and coordinate funding and actions. It also means demonstrating its dedication to supporting economic growth and resilience in central and eastern Oregon communities.

But the State can’t implement the plan alone. The path outlined in the Action Plan will require commitment, support, and guidance from local communities, private landowners, agriculture, conservation groups, the energy industry, and many others. The strength of the SageCon collaborative table will be the primary determinant of whether Oregon is able to demonstrate progress toward species recovery over the next few years. It will also help determine whether ranchers and local communities will find that sage-grouse conservation aligns with their other social, economic, and environmental goals.

A common refrain in the months and years leading up to the listing decision was that “what’s good for the bird is good for the herd.” Now is our chance to make that promise – and its converse – a reality.

In her role as Executive Director, Sara O'Brien, is Willamette Partnership’s chief strategist, lead conductor, and biggest fan. Under her leadership, Willamette Partnership is helping to build a future in which people build resilient ecosystems, healthy communities, and vibrant economies by investing in nature. Most recently, Sara was Willamette Partnership's Director of Strategy and Business, helping to refine its business strategy and identify opportunities for growth. She previously worked at Defenders of Wildlife, the University of Arizona's Institute of the Environment, and the Desert Research Foundation of Namibia. Sara holds a B.A. in anthropology and linguistics from Grinnell College and an M.S. in natural resource management from the University of Arizona. In her spare time, she enjoys relaxing with projects such as managing a farm, building a straw bale house, and raising children.