By Rebecca Kramer and Sara O’Brien

The Oregon Sage Grouse Conservation Partnership and the State of Oregon’s efforts to implement its Sage-Grouse Action Plan continue to move forward despite the recent federal move to reconsider sage-grouse habitat management plans across 10 Western states.

The federal uncertainties present a benchmark moment for the future of greater sage-grouse conservation. Specifically, federal review of the Bureau of Land Management’s land use plan amendments and mitigation guidance has created significant uncertainty about how restoration and management will unfold across the sage-grouse states for years to come. These changes could potentially undermine the cooperative, coordinated, and proactive work that’s taken place over the last decade to keep sage-grouse, an iconic chicken-like bird, off the federal Endangered Species List. 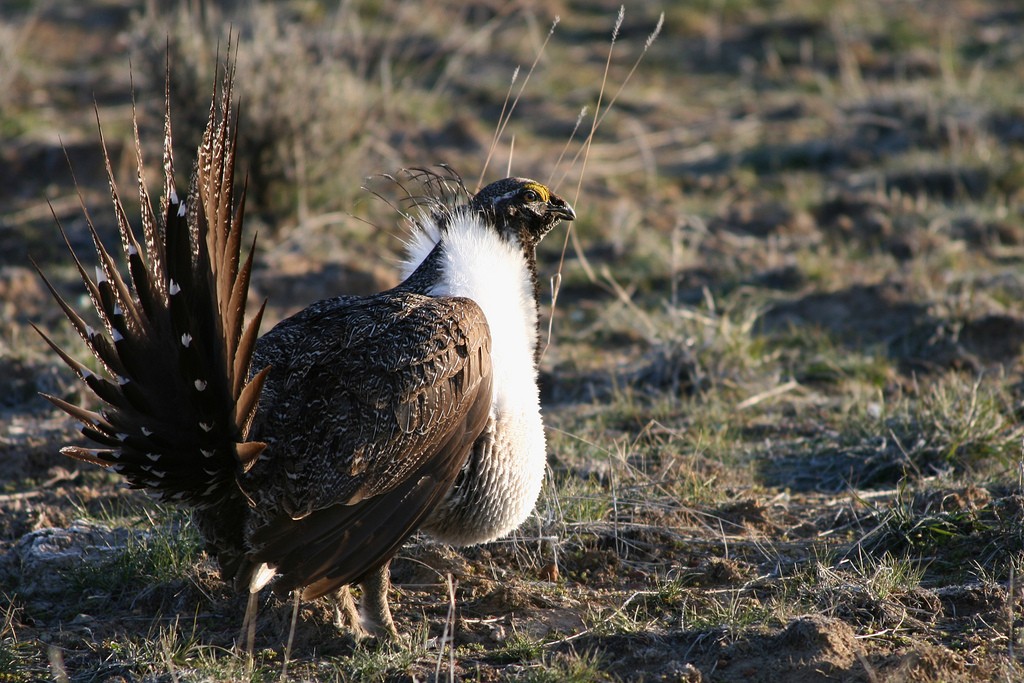 Despite this review, the Oregon Sage Grouse Conservation Partnership, or SageCon, will meet this November 8-9 in Baker City to discuss how and who can move each piece of Oregon’s Sage-Grouse Action Plan (Action Plan) forward to create a conservation plan that benefits the environment, the local communities, and the economy.

As the famous words of management consultant Peter Drucker go: “Plans are only good intentions unless they immediately degenerate into hard work.” Since the last time SageCon met in September 2016, the group of Oregon ranchers, farmers, environmental groups, and state and federal politicians have continued to “degenerate into [the] hard work” of hashing out the crucial details for implementing the ambitious conservation plan. Progress has been slower than hoped, in part because federal agency partners are waiting on further direction on anticipated policy changes from Washington D.C. There have also been changes to key staff at the federal and state level. Despite the slower pace, important progress has been made on several fronts.

Oregon continues to build and support the foundational frameworks and partnerships underpinning the Action Plan and the SageCon collaborative approach. Governor Brown has convened a coordinating council of local, state, federal, non-profit, and industry partners to help steer implementation of the Action Plan. An important role of that group will be to prioritize and coordinate investments so that the multiple funding sources for sagebrush and sage-grouse conservation and restoration can be targeted in a synergistic and strategic way to advance the Action Plan.

Throughout eastern Oregon’s sea of sagebrush, ranchers and other private landowners will be fundamental to protecting the bird and its habitat. Oregon ranchers, soil and water conservation districts, and local, state, and federal government have led the way in establishing and implementing Candidate Conservation Agreements with Assurances. These voluntary agreements by landowners are commitments to conservation actions that help stabilize or restore a species in order to help prevent the species from needing protection under the federal Endangered Species Act. They’ve played a significant role in the U.S. Fish and Wildlife Service’s decision not to list the sage-grouse as threatened or endangered in 2015.

We are supporting the state in testing and refining the mitigation program’s habitat quantification tool for its ease of use and accuracy. The tool will be used to help measure the effects of both development and restoration projects on sage-grouse habitat. While refinement and adaptive management will continue over time, having a working tool, methodology, and documentation is a key near-term step in building a functional mitigation program.

Willamette Partnership also continues to assist the state and the SageCon partners in refining the Mitigation Program Manual, including the necessary framework and foundational documents for Oregon’s proposed in-lieu fee program.

Our goal across sage-grouse country is to help steer more funds to on-the-ground conservation, and to ensure those are used as effectively and strategically as possible to help counterbalance unavoidable impacts. Willamette Partnership continues its ongoing work supporting the Oregon Department of Fish and Wildlife in setting up a functional mitigation program and helping recruit interested landowners, as well as our ongoing work with partners in Idaho, Wyoming, and Montana to help launch effective sage-grouse mitigation approaches.

Rebecca Kramer is a project manager for Willamette Partnership’s Resilient Habitat Program. In this role, she focuses on moving key strategic projects forward and helps build the business case for environmental conservation and protection. Rebecca Kramer spent the past 17 years in the environmental nonprofit sector developing and managing innovative sources of funding to restore, conserve, and protect endangered species and their habitats throughout the United States and internationally.