The Road Ahead for the Not-Listed Sage-Grouse 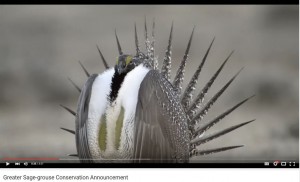 In a video announcement on YouTube Tuesday morning, Sally Jewell said the US Fish and Wildlife Service, which implements the Endangered Species Act, decided listing is not warranted for the greater sage-grouse.

This morning’s announcement that the greater sage-grouse will not be listed under the federal Endangered Species Act represents a unique opportunity for 11 western states in the sage-grouse range. The ball is effectively in the states’ court to demonstrate that state and local management of imperiled species can achieve the same or better outcomes as federal control. Fortunately, partners in Oregon are very well positioned to help recover sagebrush ecosystems and the many species and human communities that depend on them.

The state of Oregon’s “all lands, all threats” approach, described in our September 18th post, holds particular promise in that it combines:

These approaches address threats to the species on federal, state, and private lands. Oregon’s commitment to meeting specific goals in recovering sage-grouse and healthy sagebrush ecosystems, combined with the unprecedented participation of private landowners in voluntary conservation agreements undoubtedly played a significant role in the decision not to list the bird.

Implementation of Oregon’s Action Plan will present its own set of challenges, and the state may have a relatively short window to demonstrate success. Third-party litigation over the decision is likely, and today’s decision does not preclude the US Fish and Wildlife Service who will be evaluating the progress and status of sage-grouse in five years. 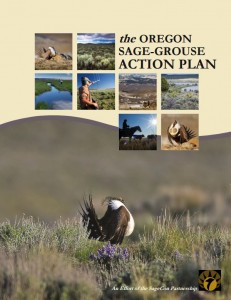 With today’s decision, the US Fish and Wildlife Service has expressed confidence in a new way of doing species conservation. They have sent a clear message that the specific tools used to achieve conservation goals are less important than demonstrating outcomes. If the states make rapid progress on implementation and are prepared to track and communicate the results, the sage-grouse may show a path forward to a more flexible – and more effective – way of meeting species conservation goals.

In her role as Executive Director, Sara O'Brien, is Willamette Partnership’s chief strategist, lead conductor, and biggest fan. Under her leadership, Willamette Partnership is helping to build a future in which people build resilient ecosystems, healthy communities, and vibrant economies by investing in nature. Most recently, Sara was Willamette Partnership's Director of Strategy and Business, helping to refine its business strategy and identify opportunities for growth. She previously worked at Defenders of Wildlife, the University of Arizona's Institute of the Environment, and the Desert Research Foundation of Namibia. Sara holds a B.A. in anthropology and linguistics from Grinnell College and an M.S. in natural resource management from the University of Arizona. In her spare time, she enjoys relaxing with projects such as managing a farm, building a straw bale house, and raising children.